It is August and west of the Hundredth Meridian the land is tinder dry; a match, a spark even just pressure and oxygen can start a conflagration. Fire has always been part of the western landscape but the rainless days of August to October now stretch from June to November. People often complain about the rain in March but by the first storms of fall the cracked earth feels the caress of the sky with gratitude. But that day is far off and at home we watch the sky for smoke and the forecast for winds as the temperature creep up towards triple digits every day.

There was a time when my current dilemma of work on the coast would seem a respite from the Inland heat. But the thing about owning land is that it is always there, always needing something. A part of you is anchored to that place. Now while I am surrounded in mist in fog half my mind is on a tinder dry hillside over a hundred miles away; have I left a loose electrical connection that could spark, or a piece of glass in the sun?

Home last weekend for a few days I managed to coral the livestock for sixty-four pedicures. They don’t like it much more than I do. As the morning wore on though the heat worked for me; unable to sweat they would quickly tire and mostly relent. I still got one good kick from a goat that left a mark the size of a fist in my leg. The rest of the day went quietly and it was plain to me that it was better to get sick, run a fundraiser, get cooked by the sun and get kicked by a goat than work away.

Three chickens have now gone broody and one stable is dedicated to them. The Orphington is a confirmed matron with a brood last year behind her but the two Cuckoo Marans are not. I eye them warily as they have cost me my eggs this week as all the chickens are busily filling their nests. Each one is a mix of blue and green and white. While pessimistic I am unwilling to brake the gaggle up so they sit quietly while the Orphington tends her chicks. With the angry goats and sheep departed the calm settles back in the barn as the maybe mothers to be set.

The same weekend I managed to make nearly a gallon of plum jam and 3 gallons of chutney. The canning ran late into the night as it always seems to do and as I stared at the rows of shiny jars on the shelf to ignore the sticky counters behind me I felt a certain small sense of pride; like somehow these twenty-odd jars validate the time and effort of owning land. The next day I made an Indian dinner to go with the chutney and one child who has always been spice-averse loved it and ate half a pint of chutney with it. At nine he is at that age when the horizons of his pallet start to expand, and this is the first step on an amazing journey of flavor for him. So it is validation in a way.

That labor though pays the bills so at six AM the following day I let out the chickens, brought in the dogs and hit the road. I stopped for one last look across the dry yellow fields. The next time I see this place my forties will have passed and my 50s started. Each decade has brought upheaval in my life. My teens started in Boston and ended in Vermont with me planning to move west. At 21 I moved to Olympia alone and 30 found me married with son in Portland.  By Forty I was long divorced and looking forward to a twilight of bachelorhood and motorcycles. Fifty finds me in the country with five kids. I hope sixty finds me here. It’s been a long road and there is such a view. And so many things to get done.

Looking across the valley at the morning light I felt a certain sense of accomplishment at how far the place has come since we moved in. Then I realized that the dog was in the wrong field. Oh well jars of jam and chutney are safely tucked among my clothes so a piece of home is with me. 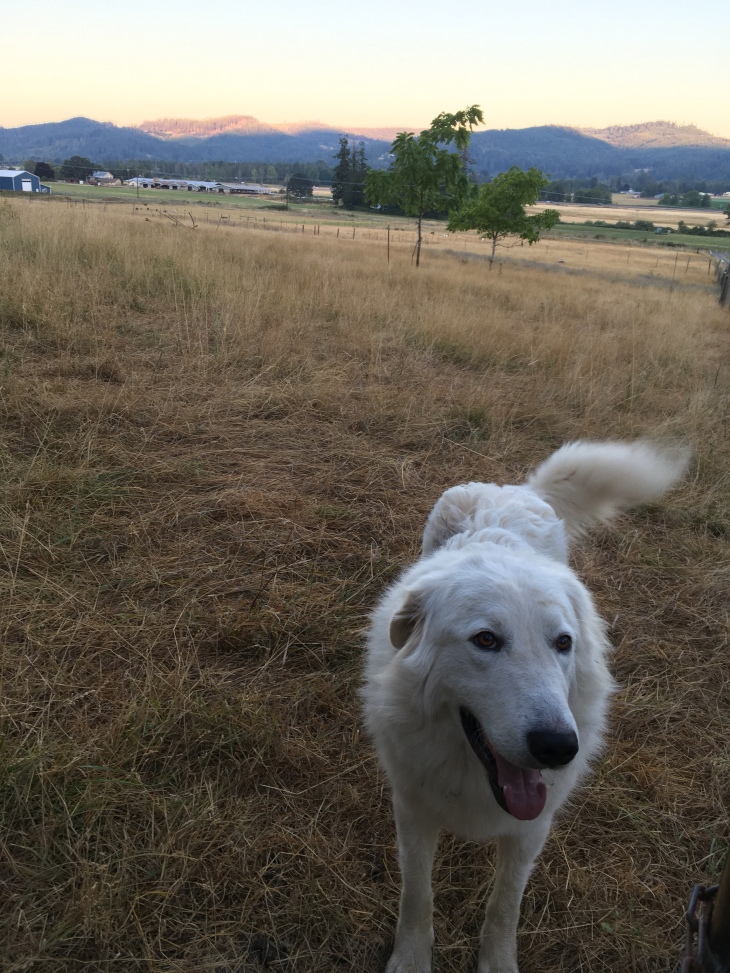 2 thoughts on “The Burning Season”