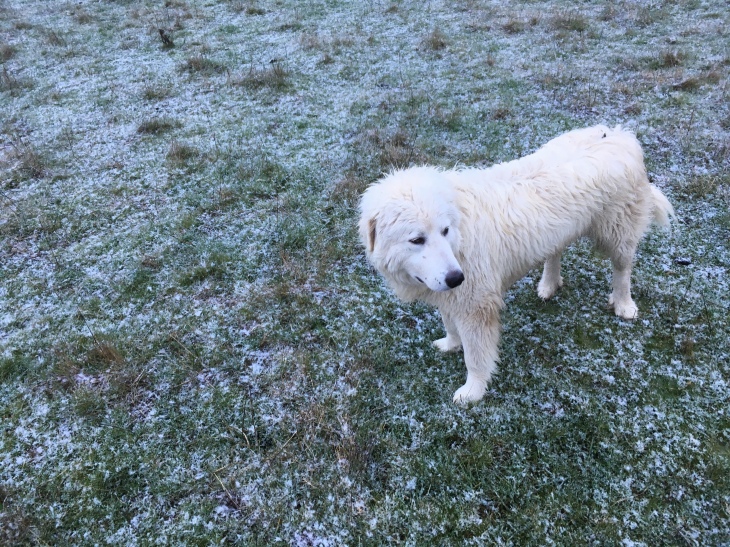 n the West of Oregon this is the season of frosts. Lacking a true winter we rely on this time to kill the bugs, burn the blackberry leaves and generally fight back weeds; poison oak cut in winter dies. The ground rarely freezes more than an inch or two, while overhead the battle lines between the cold and arid east and warm wet winds shift as temperatures can drop midday of rise quickly after sunset. The goats and sheep rarely venture out before nine and come home early begging for hay and grain.

This weekend the snow came down heavily for about five minutes and my daughter rushed to get outside to play in snow-dusted grass while the dogs raced, the sheep looked on unamused. So far from my childhood where snow was ever-present in our minds; playing in it, digging out of it, trudging through or gliding over it. Even summer was always tinged; we knew it was coming and many times we would sit out in the humid twilight longer drinking in the ability to linger in short sleeves outside. Last week the winter sun broke through and afternoons reached into the sixties, and I watched the two youngest play with the same fevered urgency, staying out until true darkness through the passing all the shades of red and golden light to trip through the gullied fields for dinner. Pink cheeked with fevered eyes they collapsed at the table and ate heartily. Long gone for me are the long and idol days of childhood. Any landowner knows the list of things to be fixed is always longer than the hours of daylight especially when one leaves before dawn and returns after sunset five or six days a week. At least on acreage I can choose to work outdoors when the sun shines.

This weekend the sun is gone and snow falls from the sky to melt on the ground. Cleaning out stables I can hear the children as they rush in and out of the house; wanting to be warm but wanting to be outside. Seven times over I load fertilized bedding from the stable to the garden, each time with an escort of some combination of a 2 children and 2 dogs until at last even the neurotic mini aussie abandons me to shoveling straw and poop alone in the gray end of the day. Before and behind me are the mountains, below me three rivers, one each of water, tar and steel, along which so many are in motion while I am still; an axis around which for this moment the world seems to spin. In church I had listened as several people spoke of passing parents, sisters and brothers, cousins and friends. I believe many people near the end will hang on for one last Christmas, one more time to see family and friends in joy. For people too this is a season of passing; their love plowed into future generations to spring again tenfold, to sleep in peace after a life of labor.
For farmers the rest is shorter; in several weeks the ground will dry enough to plow and begin again. Which reminds me that the plow needs sharpening, the tiller is busted and my irrigation plan could use some work. Even as the snow flies my mind’s eye sees the growing season. “Spring is coming” is simultaneously a fact, a promise and a threat. And as usual I am behind schedule and short money to prepare. I think the natural state of my existence.

At least as a farmer, even a casual one, I am often out standing in my field.